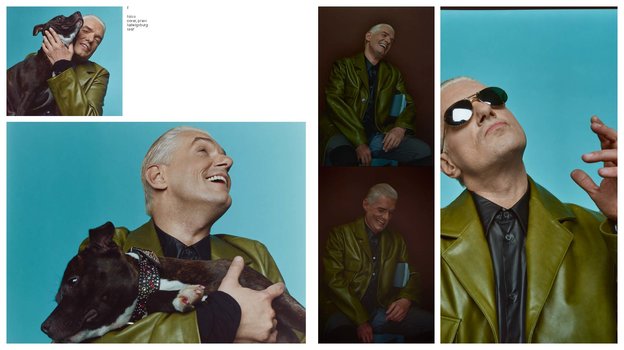 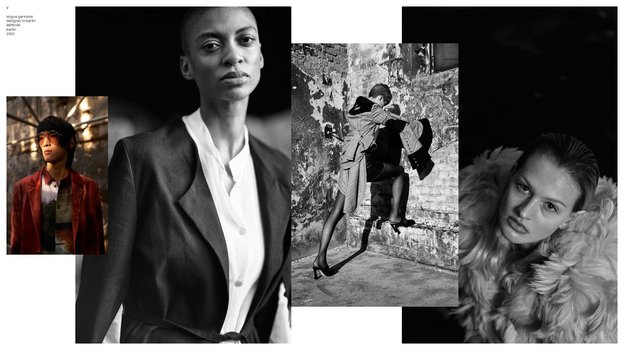 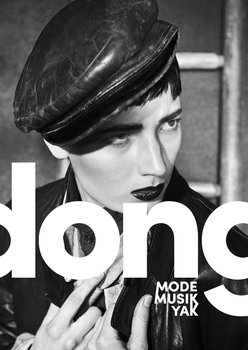 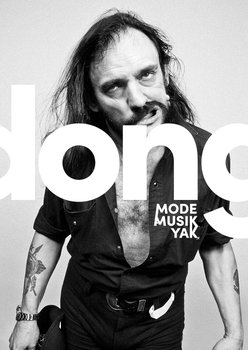 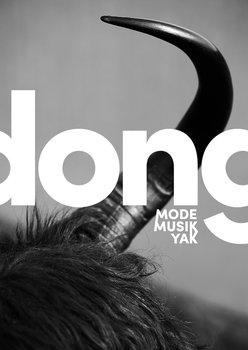 The exhibition DONG – FASHION MUSIK YAK is a solo presentation by the fashion- and music-photographer Axl Jansen. The exhibition concept at the Villa Merkel is a collaboration between the photographer and the designer and publisher Uli Schwinge.

The basis for the tripartite project is the catalogue raisonné of Axl Jansen (DING) which, over more than 1,100 pages, presents a non-commentated retrospective covering thirty years of the photographer’s work, including journeys, encounters, music, stories, fashion, style, and a great deal of subversive wittiness. As a remix in the Villa Merkel, DING becomes a walk-in and interactive magazine. In free allusion to the musician Falco, who was likewise photographed by Axl Jansen: OUT OF THE DING – INTO THE DONG.

DONG consists of a play with sounds, with words, with sense, nonsense, and flashes of insight. The project samples fashion, pop, surfaces, humour, and profundity. There is also a playing with the product- and advertising-levels of fashion- and music-photography. What or who is the product? What role is played by the presentation, and when do visitors themselves become a product?

From 2004 to 2008, Axl Jansen was editor and creative director of the magazine DONG, which was distributed in sixteen countries. The seven editions were taken into the magazine collection of the MoMA in New York. The magazine offered an ironical response to the slick and shiny fashion periodicals of those years. The publication followed its own rules and invented itself as an independent space in which emotion and self-reflection go hand-in-hand.

The exhibition is a continuation of the magazine, an extension of its energies into the spaces of the Villa Merkel. Towards the end of the exhibition, this walk-in magazine will be transformed back into a printed work: dong infinity – die liegende acht.

Axl Jansen (*1965, lives in Berlin) is a fashion- and music-photographer who began his photographic career in Stuttgart during the 1990s. Among other things, he became known through a campaign of the Stuttgart-based magazine “Lift” with faces familiar to the city such as Rezzo Schlauch or the Fantastische Vier. He photographed numerous musicians such as Freundeskreis, Tic Tac Toe, the Leningrad Cowboys, Nina Hagen and Moby. Axl Jansen likewise rapidly gained a reputation in the areas of fashion and high fashion; he worked in Berlin, London, and Paris. He photographed a prizewinning campaign (Holys) for Hugo Boss in which, for example, Derrick and Marc Almond were featured as models. Axl Jansen works in Germany and France; furthermore, he is active for fashion labels such as Chanel, Yamamoto, Dior, and Gaultier.

The exhibition will be accompanied by various events and an outreach programme. There will be conversations with journalists about musical tendencies in the 1990s, with fashion experts about sustainable fashion, and with photography experts about approaches in fashion photography. Moreover, a series of films will be presented in collaboration with the Kommunales Kino Esslingen. 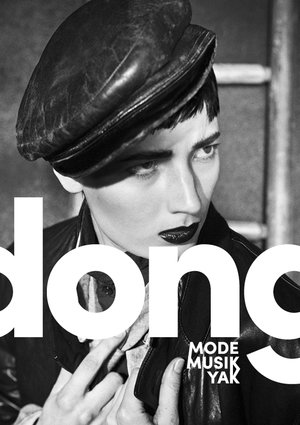 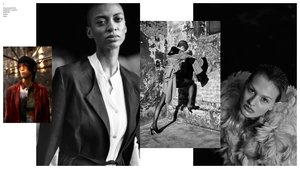 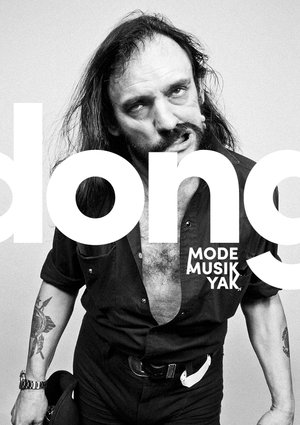 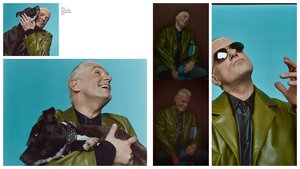 In the app BELLE & APHRODITE for smartphone or tablet, it is possible to experience a walk-in audio-visual metamorphosis of virtual plants.

The 3D plant BELLE extends across the entire Merkelpark. As an interactive form-cloud, it leads visitors, on the basis of data regarding their location and movement, to a virtual rose at the centre of the park.

APHRODITE was designed for the skylit atrium. In recurrent audio-visual loops, the 3D installation develops into a Phalaenopsis, a familiar type of orchid. APHRODITE can be viewed from all perspectives and, in its overlapping of simulation space and actual space, plays with the experience of abstraction, proportional relationships, proximity and distance.

Barbara Herold (*1977) directs her attention to the shaping of reality through the media. She investigates structures and phenomena which have established themselves through the influence of media technology on society; she develops her own systems on the basis of prevalent design practices such as computation and algorithms. Her works arise in the dynamic field between analogue and digital technology. 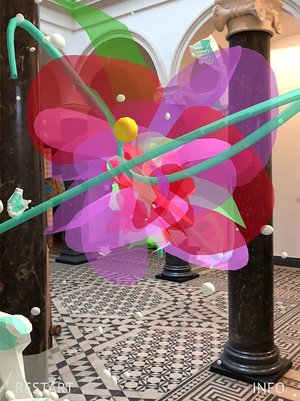 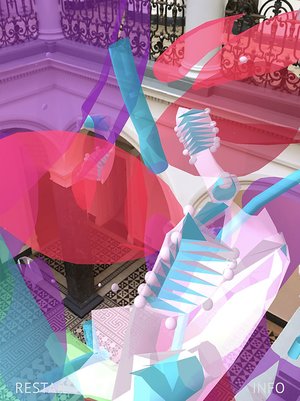 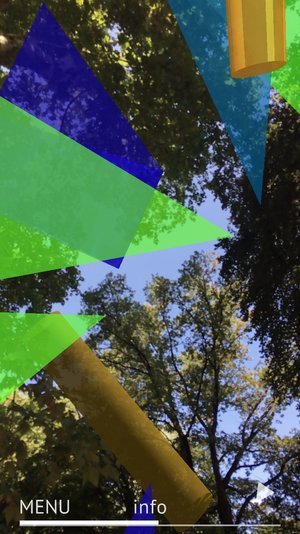 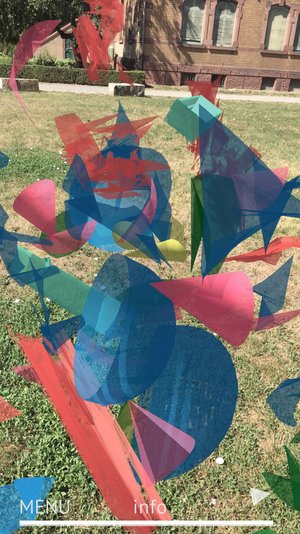 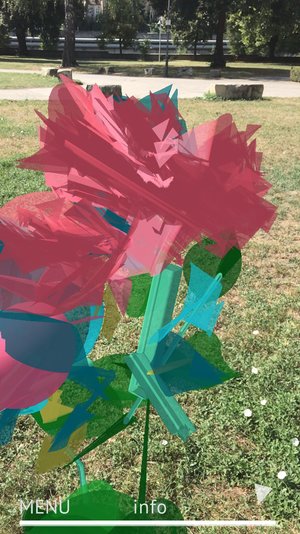 The ‘Mobile Garden’ of the artist and Documenta participant Lois Weinberger, was set up in front of the winter garden of the Villa Merkel, where it will remain for an extended time. In its wildness, it contrasts with the surrounding Merkelpark, whose well-kept greenery is reminiscent of English landscape gardens.

A field formed out of yellow plastic tubs filled with soil has been exposed to the free forces of nature. Over time, pioneer and ruderal plants have come to occupy the space in a spontaneous colonisation. Nature unfolds in accordance with the dynamism of its own laws in a veritably paradisal, because free manner. A Garden of Eden established itself.

Over the years, this natural process of colonisation began to change into a form of decaThe tubs gradually become bleached and decompose. The plastic particles blend with the soil and the plants; after decades, rainfall can be expected to have washed the underlying area clean again.

The garden is a fundamental form of our encounter with nature. We are familiar with gardens that aim at producing crops as well as those that are set up as beatific sites of contemplation. Affinities with paradise are possessed by the fruit and vegetable garden, the Baroque pleasure garden or, as an oasis amid the city, the public garden – in Esslingen, namely the Maille and the Merkelpark. 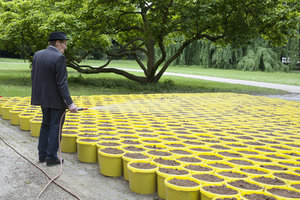 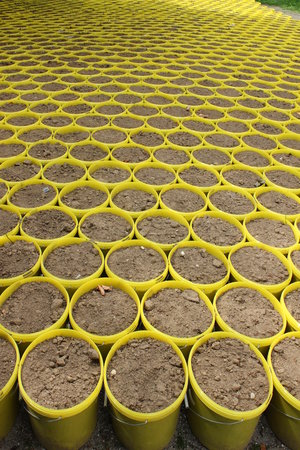 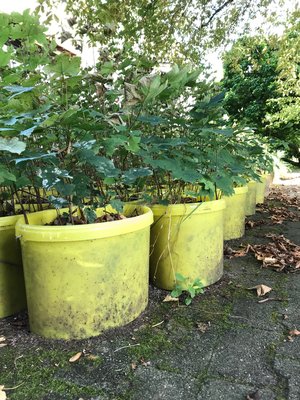